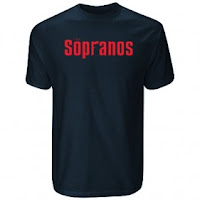 Since the Sopranos season finale HBO has come out with its own line of Sopranos paraphernalia. It is on their main website and it ranges anywhere from wine to t-shirts. Also there has been a lot of rumors floating around about a Sopranos movie, according to Nick D’Urso, who is manager at The Satin Dolls strip club also known as that Bada Bing in the Sopranos, has claimed that he is not going to make any huge changes in his club because he had a tip that they were going to make a movie. This gives us all hope that the Soprano legacy will keep going.
Posted by PR Class at 10:55 PM

Older Post Home
Subscribe to: Post Comments (Atom)
Welcome to HBO's official blog where you can catch the latest news and updates about our most popular shows! Check out our updates to find out information on the highly acclaimed shows True Blood, The Sopranos, Hung, and HBO Boxing. Not only will you be able to get updated information on upcoming can't miss showtimes and events but you will also be able to catch the real scoop and the need to knows that you can only find here on the official HBO Blog!