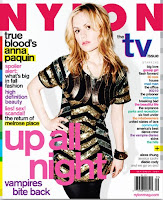 Peronal Quote "None of the characters I've played are really like me. That would be boring. It wouldn't be acting."
Posted by PR Class at 12:39 PM