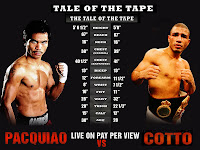 For all you boxing fans the countdown to Paquiao/Cotto is on. 19 more days until these two warriors collide at the MGM Grand Hotel and Casio in Las Vegas Nevada on NOVEMBER 14th. These two giants of the Welterweight world are ranked pound for pound the best in the world and need no introduction. The seemingly indestructible Manny Paquiao 49-3-2 37 KOs, is a Philippinean powerhouse who would make even Rocky wonder why he isn't on the floor yet. At 5'6" don't let this little guy fool you he can take a few punches and flurry you with a few of his own. He takes on the hard hitting Puerto Rican Miguel Cotto. Cotto is both respect and feared around this division for leaving cuts and bruises that aren't easily healed. Needless to say this fight will be EPIC! If you want 12 rounds of old school boxing order this fight on PPV on November 14th, it will be worth every cent...literally.

Don't forget 24/7 is back following the fighters on their road to MGM. If you missed the first episode check it out later today 10/26 at 7:30 PM on HBO on demand! If you can't make it home to catch it check it out online here!
http://www.hbo.com/boxing/events/2009/1114_pacquiao_cotto/index.html
Posted by PR Class at 9:16 AM

Add comment
Load more...
Newer Post Older Post Home
Subscribe to: Post Comments (Atom)
Welcome to HBO's official blog where you can catch the latest news and updates about our most popular shows! Check out our updates to find out information on the highly acclaimed shows True Blood, The Sopranos, Hung, and HBO Boxing. Not only will you be able to get updated information on upcoming can't miss showtimes and events but you will also be able to catch the real scoop and the need to knows that you can only find here on the official HBO Blog!