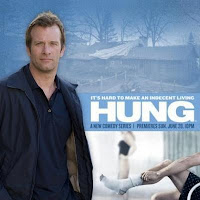 Season one of Hung has ended with one of their most drama filled episodes yet! Ray is concerned about getting laid off from his job, Tanya is left with an ultimatum of sharing Ray with Lenore as a Happiness Consultant or having no one to push around, and Ray’s most recent client is someone who he would have never dreamed of.
Because Ray is worried about the layoffs his school is doing, he is more than willing to work with Lenore – a professional in his eyes – in order to obtain money so that he can find a new home for him and his children. However, this upsets Tanya because she is afraid of losing him completely. As Ray tries to work it out with Tanya, Lenore presents him with a new client that turns out to be his ex-wife.
With such a brain spinning closure, the series have left the audience wanting more, panting for the next season of Hung. It would be no surprise if the premiere for Season 2 will surpass the 2.7 million rating it received for their Season 1 premiere.
Click here to watch clips from the final episode!
Posted by PR Class at 9:01 AM